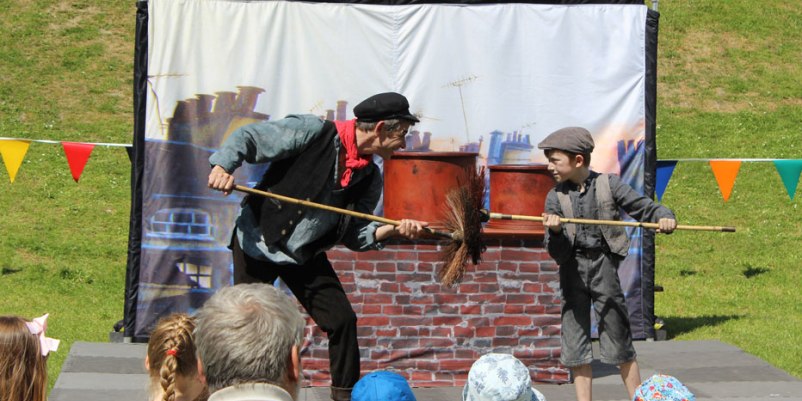 The Chimney Sweeps: A Family Business

Inspired by Charlie Chaplin’s “The Kid”, “The Chimney Sweeps: A Family Business” is a piece of family theatre with nostalgic airs that brings back the charms of the Victorian era in Mary Poppins style. It is a silent show choreographed to an original music score, and it includes original jigs, dazzling acrobatics, juggling, humour and a full load of charm.Circle of Two is an acrobatic theatre company with an aim to revitalise old popular theatre traditions for contemporary family audiences. Drawing inspiration from a wide variety of artistic genres, from classic literary works to the great film-makers of the silent era, they create highly evocative and poetic shows with unique and personal aesthetics. They use circus, puppetry, pantomime and vaudeville formats to tell simple and engaging stories, recalling images and archetypes rooted in the collective unconscious. ​Celia and Ralph graduated in 2001 by the Central School of Speech and Drama and The Circus Space in London with an honours degree in Theatre Practice and Contemporary Circus. Celia completed a MA in Theatre Studies in 2013 at the University of Surrey, where her research on the phenomenological impact of Puppetry and Masks in the theatrical event was awarded with distinction. ​After their first touring seasons in the UK with Giffords Circus, Circle of Two went touring around Europe, performing in circuses as prestigious as Circus Benneweis in Denmark, Circo Raluy in Spain, Cirque Phenix Junior in France and the permanent circus building in Munich Kronebau. They have been invited to participate in festivals such as Le Festival International du Cirque de Massy in France or the International Festival of Circus Arts of Izhevsk in Russia. Circle of Two have performed in street theatre, circus and cabaret for more than fifteen years. They have won the Prize of the Public both in circus and theatre festivals. Their work has been broadcast by national television stations worldwideThey are also experienced in teaching circus workshops to people of all ages. They have a variety of shows and acts that include a wide range of performing disciplines such as physical theatre, puppetry and circus."It is always a great pleasure to watch these two supremely professional artists at work. Their meticulous attention to detail in performance, costume and presentation is quite stunning." Dave Buxton, Artistic Director of Devizes Outdoor Celebratory Arts ​